A continuation of Part 1: Epic Cinematography and Philosophy of 2001 Space Odyssey by Stanley Kubrick:

The color palette from the landing of the space shuttle (red and green) reminds me of the Japanese film AKIRA.

Anyways, to take it back to 2001, note the nice colors in this scene (burgundy, orange, pink, taupe-green):

Photographer of the future

The next scene, you see the press conference, with this photographer of the future:

Now highlighted in pink– notice the movement of the photographer, all around the frame. Sometimes the photographer is standing, other times crouching. At the very end when he is exiting, note the beautiful shadow:

This is what his camera looks like (very similar to the video cameras of the past):

Look at this photo of Robert Capa:

Camera angles in the ‘war room’

Then immediately after, you see in the ‘war room’ (press room), the great movement/framing of the camera:

I particularly love this minimalist composition:

User-interface: Locking in // landing on the moon

I love the tones and the user-interface when they’re trying to land the shuttle on the moon. Note the bright yellow user-interface in the center (with the bright-green accent marks), and the little touches of purple around the frame:

The nice zen of the composition here:

Scene on the moon (meeting the obelisk for the first time):

Note all the great camera changes, angles, and perspectives in this scene:

One frame I want to analyze is this one: the telephoto shot with the rectangular/pink lights on the left of the frame, and you have the astronauts walking into the frame. It is incredibly dynamic!

Another epic scene: the moment the man touches the obelisk for the first time. Note the subtle spacing, and minimalist composition:

And a very close-up on the hand. Note how the strong vertical line is a little off-center to the right. I think this makes the composition more dynamic.

Also note, there are exactly 5 astronauts (outlined in cyan), that are neatly spaced apart from one another. Also, I have noticed when trying to achieve balance in a frame, odd numbers works best (the ‘rule of odds’). So having 5 astronauts (odd number) is a good balance!

Then a nice palette cleanser, with the all-black background, with the white-dotted stars:

Then the movement of the spaceship. Note how the ships of STAR WARS looks very similar to this ship: 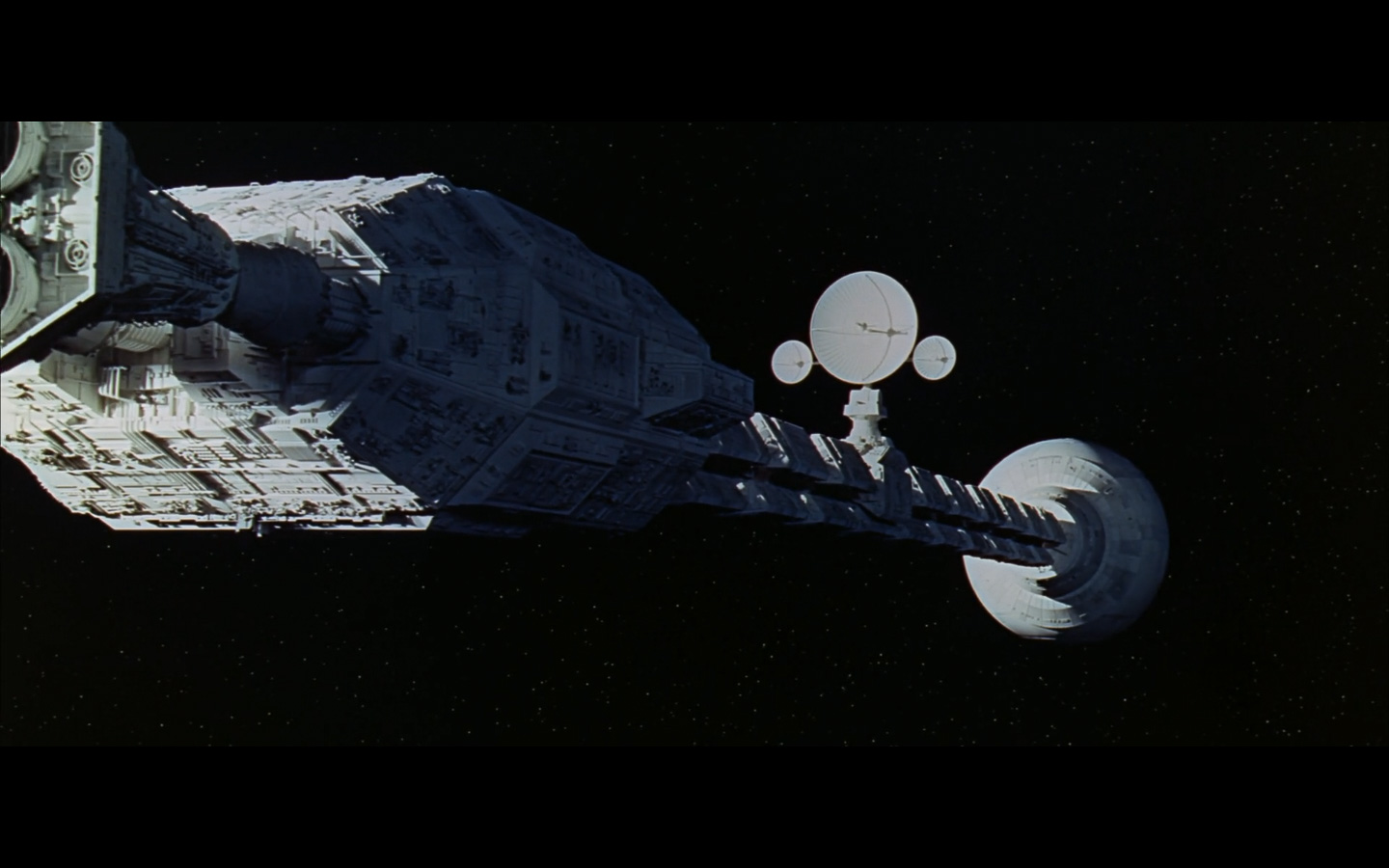 Then a front shot: the head of the ship looks like a human face:

Then a wide side-shot of the ship. I quite like these transitioning camera angles/perspectives, to give variety and a sense of scale to the spaceship:

When I first saw this scene, it took my breath away. Seriously — this was shot nearly 50 years ago, and how creative Kubrick was with the cinematography!!! And how did they create the special effect of the man running “wrong-side-up”?

Scene 1: Man running horizontally around in a circle

First of all, watch the animated GIF:

Then, here are the still photos:

Scene 2: Man running vertically around in a circle

The next scene, the same action (man jogging around and boxing in the air), but this time… the scene changes orientation (now going vertical!)

Then, introducing our new best friend (and evil villain) HAL.

In the animated GIF, you can see what HAL is seeing– the main character (DAVE) getting close to HAL to inspect him.

To be continued in Part 3…